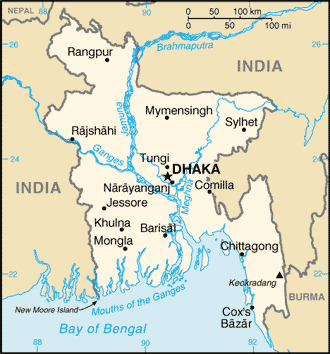 Bangladesh is a small country, but it is one of the most densly-populated nations in the world-3,310 people per square mile. That’s like squeezing half the population of the entire United Statees into the State of Arkansas. Overpopulation contributes to widespread poverty and the poverty is worsened by recurrent natural disasters, monsoons being the most frequent. Flooding destorys crops, homes, and lives. Some years two-thirds of the land is under water.

Travel is slow and rough. City streets are crowded with rickshaws, taxis, buses, trucks, animals, and people. About 60% of the roads are paved, but traveling on many of them is still a jarring experience.

The most prevalent religion is Islam. It is estimated that approximately 86% of the citizens of Bangladesh claim to be Muslim while Hindus make up 12%, Buddhists 1% and Christians 0.5%.

Many people in the villages speak their local dialects. When the children go to school, they learn Bangla, the official language of Bangladesh, and English.